Nestled between the Caribbean Sea and the Atlantic Ocean north of the West Indies, Saint-Barthélemy or St Barths is a small island of 25 km2 combining modernism and tradition.
Saint Barths has preserved the charm of its wild nature and its precious environment.
This volcanic island bordered by dream beaches is the perfect place for a sun destination in a paradise setting, translucent sea, white sand beach and a sunny climate all year round.
Despite international tourism, it has managed to protect itself from mass tourism.
This small Caribbean rock is synonymous with luxury, calm and pleasure.

The first European to have approached the island is Christopher Columbus, who named it in honor of his brother Bartolomeo, during his second voyage in 1493. He then claimed it for Spain.
Originally, the Caribbean name of the island was Ouanalao.

In 1648, came the first occupation by the French, by decision of Commander Lonvilliers de Poincy.

From 1651 to 1656, the island is governed by the knights of Malta. It is then abandoned until1659, when it becomes a French colony again.
Because of poor soil and a very dry climate, it offers almost no economic potential, but remains a strategic issue in the north of the Lesser Antilles including its naturally protected Carénage port. The inhabitants mainly develop fishing, goat rearing, salt harvesting, cotton and indigo growing.

In 1784, the island was ceded by Louis XVI to King Gustav Ill of Sweden against a warehouse right in Gothenburg.
The Swedes make St. Barthelemy a free port in 1785.
Ravaged by a cyclone and the fire of its capital in 1852, St. Barthelemy no longer resources and no longer of commercial interest, the King of Sweden and Norway Oscar Il decides to give the island to the La France.

In 1946, the French adventurer Rémy de Haenen landed for the first time a plane on the island, in a savannah land where the airport Gustave III will be built.

In 1957, David Rockefeller built a modernist villa at Colombier Cove. The billionaire is imitated, and since the 1960s the island is turning into a luxury tourist destination, reinforced by the ban on building high-rise buildings and the lack of mass tourism.

On December 7, 2003, the voters of Saint-Barthélemy approved by popular consultation an institutional project making their island a territorial collectivity with a single assembly detached from the DOM-ROM of Guadeloupe.

The tropical climate gives the island’s temperatures a mild between 22 and 30 ° C all year round and maximum sunshine. In addition, the water temperature never drops below 26 ° C: ideal conditions for a heavenly holiday! The best time to go to Saint Barthélemy is winter, during the dry season, from December to March, but except during the hurricane season, around October, the island can be visited all year long.

The island has a small hospital in Gustavia with an adjacent diagnostic laboratory, there is also at least one private diagnostic facility. Specialists in cardiology, general medicine, dentists and paediatrics are also available. There are many pharmacies dispensing medicines, In St Jean and Gustavia.

For all visitors, formalities in St Barts require a valid passport. And, depending on the country of origin, a French visa valid for France except CTOM or DFA (French departments of America) with the mention COLLECTIVITE TERRITORIALE DE SAINT BARTHELEMY ET SAINT MARTIN must be issued by the French Embassy before departure.

For American and Canadian citizens, you must have a valid passport, obligatorily accompanied by a return or continuation of travel ticket, it is not necessary to have a visa if the stay is shorter or equal to 30 days. On the other hand, the passport must imperatively have a period of validity greater than 6 months at the time of entry into our territory. No vaccination is required.

For animals, it is necessary to have an up to date certificate of rabies vaccination and a health certificate issued within 5 days. Animals belonging to French tourists must also be tattooed. 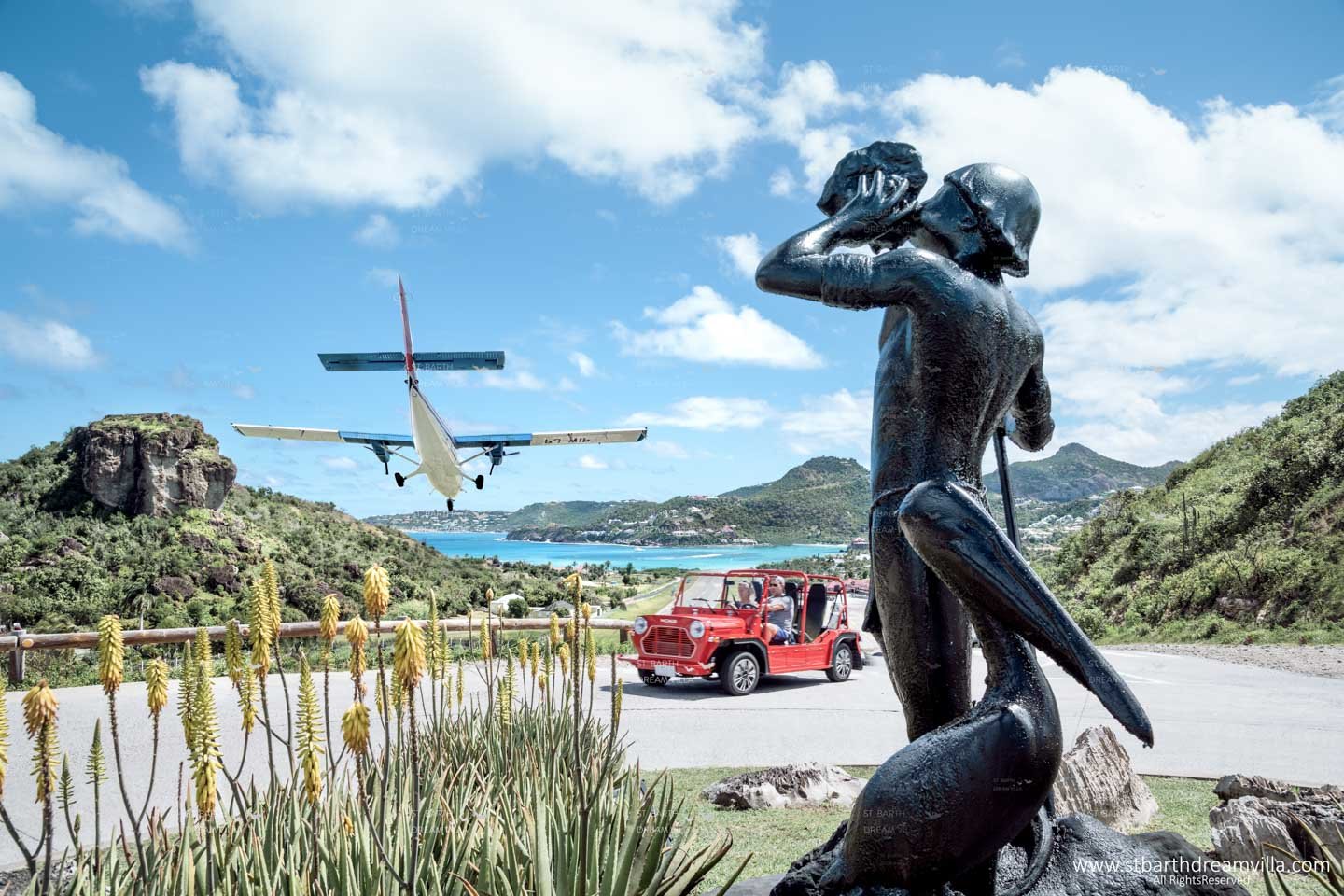 GETTING TO ST BARTHS

St Marteen Juliana Airport is the major and most convenient gateway to St Barts for both USA and Europe.

We also recommend packing a few essentials in your carry-on-bag- you wouldn’t want to be without your swimwear if your luggages turns up a day late, would you?

It is possible to take a ferry to Saint-Martin. Two companies make several trips each day.

The Voyager departs from Marigot, on the Saint-Martin French side. The crossing takes about 1 hour.

The Great Bay Express departs from Bobby’s Marina (Saint-Martin Dutch side) and makes the connection in 40 minutes.

There are also companies offering private transfers between both islands. The time of the crossing varies between one hour and one hour and a half depending to the boat model and weather conditions.

To discover the island, we advise you to rent a car. It is also possible to rent quads and motorbikes.

Be careful on the roads on the island as they are narrow and the island is very hilly.

It is also possible to take a taxi or hire a private driver.